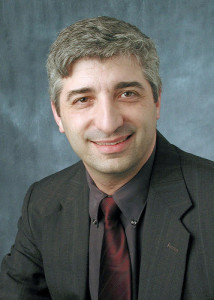 Dr. Jorge Zornberg, Professor of Civil, Architectural and Environmental Engineering, and his CTR research team are revolutionizing the roads we drive on. Under his leadership, their research focuses primarily on soil structure design, geosynthetics, and waste containment facilities, with specific emphasis on the geotechnical aspects of transportation engineering. His work covers roadways, retaining walls, bridges, and embankments, which are investigated using a wide range of experimental, numerical and field monitoring techniques.

Significant inroads have been made to address nationwide problems that are particularly relevant to TxDOT, including the proper characterization of expansive clays and the use of geosynthetics to stabilize the base layer of roadways. Indeed, TxDOT has recently created two online videos to highlight the impact of Dr. Zornberg’s work in the state roadway infrastructure, including a video on geosynthetics for paved roads [view video] and best practices for working with expansive clay soils [view video]. These efforts could help improve and inform TxDOT requirements for future pavement projects, provide significant cost savings, and impact the way researchers conduct experiments.

Expansive clays create significant distress on the roads constructed over this type of soils. A large swath of Texas, along the most densely populated areas of the state, has a particularly significant abundance of expansive clays, which can damage highways and induce significant cracks in the pavement surface. Dr. Zornberg is developing geosynthetic reinforcements for pavement that could help improve and eventually eliminate these cracks. With less need for constant repair, the use of geosynthetics could lead to significant cost savings in addition to enhanced road performance.

To further reduce the impact of Texas’s expansive clay soils, Dr. Zornberg developed particularly innovative centrifuge techniques to quantify the magnitude of swelling. While previous approaches were either inaccurate or extremely time-consuming, the technology developed by Dr. Zornberg’s team provides an accurate, expeditious approach to characterize the soil swelling beneath pavement structures. The objective is to recreate the field response within a laboratory setting in a way that allows designers and researchers to measure the shrink-and-swell phenomena of clays in response to particularly wet or dry seasons.

Previous research work by Dr. Zornberg has received support from organizations such as the Environmental Protection Agency, the US Department of Education, the Geosynthetic Institute, geosynthetic manufacturers, and the California and Colorado Departments of Transportation.

Dr. Zornberg is the W. J. Murray Fellow in the Geotechnical Engineering Program at UT Austin and a licensed Professional Engineer with over 30 years’ experience in both the research and practical sides of geotechnical, geosynthetic, and geoenvironmental engineering. He earned a BS degree from the National University of Cordoba in Argentina, a MS from the Pontifical Catholic University in Rio de Janeiro, and a PhD at the University of California, Berkeley. He joined the UT Austin faculty in 2003 and started working with CTR soon after.

Throughout his career, Dr. Zornberg has received numerous accolades for his research. In 2002, President George W. Bush awarded him the Presidential Early Career Award for Scientists and Engineers. This presidential award is the highest honor bestowed by the US government on outstanding scientists and engineers beginning their independent careers.

In addition to this prestigious accomplishment, Dr. Zornberg received the J. James R. Croes Medal and Collingwood Prize from the American Society of Civil Engineers, the IGS Award and Young IGS Award from the International Geosynthetics Society, the NSF CAREER Award, and numerous best-paper awards. He has authored over 400 technical papers, as well as book chapters, and holds three patents.

From 2010 to 2014, Dr. Zornberg served as president of the International Geosynthetics Society (IGS). He has also participated in numerous ASCE Geo-Institute leadership roles, including chair of the Geosynthetics Technical Committee and co-chair of the 2017 Geo-Congress. He is recognized for his evaluation of the closure of high-profile hazardous waste facilities, including the first evapotranspirative cover and the first triple-lined system in US Superfund sites. He was involved in the first integral geosynthetic-reinforced bridge abutment in a US highway.

To help further his research and its impact on both Texas and national roadways, Dr. Zornberg founded the Geosynthetics and Geoenvironmental Laboratory as well as the Transportation Geotechnics Laboratory at UT. The laboratories, which are continuously growing, involves specialty devices such as soil-geosynthetic interaction equipment, pullout testing devices, direct shear devices, an accelerated pavement testing system, large- and small-centrifuge systems, triaxial test systems, hydraulic conductivity testing devices, as well as hanging column and pressure plate devices.

With years of experience and innovations in both his academic and professional life, Dr. Zornberg’s research continuously adapts and pushes the bar higher. As the demands and needs for reliable and sturdy road construction continue to evolve, Dr. Zornberg’s work continues to develop new foundations to drive on.